Charged particles which are subject to acceleration emit electromagnetic radiation (unless they move on quantum mechanically stable orbits). Usually the emitted power is proportional to the number N of radiating particles (incoherent synchrotron radiation). Under certain conditions the charges may radiate coherently “in sync”. In this case the field strengths interfere constructively. Since the intensity of the emitted radiation is proportional to the square of the field strengths the total power scales as N2 leading to an extremely large energy loss of the system.
Depending on the application coherent synchrotron radiation (“CSR”) may be either undesirable e.g. in the operation of particle accelerators because the dissipated energy will lead to beam loss or it may be a wanted feature when intense coherent radiation is needed. In astrophysics CSR may help to understand certain radiative phenomena. Radio pulsars are spinning neutron stars which emit electromagnetic radiation predominantly in the radio frequency range. The energy loss can be calculated precisely measuring the spin down of the star which can be done very accurately. A convincing estimate of the available charge in the magnetosphere of a neutron star was presented by Goldreich and Julian. Combining the two results it can be concluded that the number of charges is too small to explain the observed energy loss by an incoherent radiation mechanism.
The conditions leading to the emission of CSR are not met easily. Obviously, it is not possible to control the position of each charge by hand. However, interaction of an electron beam with its very own emitted radiation may lead to a self-modulation of the beam resulting in regular patterns in the electron distribution (“micro bunching”) with well defined distances between each other.
My research focuses on the understanding of the conditions leading to the emission of CSR as well as the computation of observable spectra. 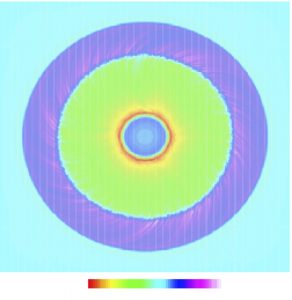 Emission of CSR by a thin circular electron beam. The electric field strength is mapped by different colors. Regular patterns can be seen.